“The Real Shelby” by William Edgar

THREE years after their hailed documentary, The 24 Hour War, recounted the mid-1960s Ford-Ferrari confrontations at Le Mans, producer/directors Adam Carrolla and Nate Adams are back with Shelby American. This time out, the filmmakers examine the life story and celebrated doings of the late, emphatically great, Carroll Shelby. Through collected photographs, archival footage, and interviews with Carroll, his sons and grandsons, Shelby associates, and an eminent cast from the automotive and business worlds, this new offering traces his full-throttle life, from 1923 birth in Leesburg, Texas to 2012 death in Dallas.

Even the most seasoned scriptwriters would be hard-pressed to invent a character as engaging as Shelby–conceivably today’s best-known car-guy-name in the world. And what we have here in this two-hour bio-doc is reality’s edition of the movie-version Carroll portrayed by Matt Damon in Ford v Fewari, the James Mangold blockbuster I reviewed in the last issue. While Damon toiled to construct Shelby’s persona for cinema audiences, Shelby himself here is a treat to behold, giving us, on our home screens, the full-scale, teasy-testy man I knew for 56 of his 89 years. Carroll’s stringent rural Texas boyhood, lively teen scene, and time spent piloting Army Air Corps planes are engrossingly rendered. Then there’s his early racing-driver’s climb up the ladder from scrappy MG to squeamish Nard, serious Maserati, and, eventually, spectacular Ferrari. Our appetite for that beloved marque gets amply fed by episodes of this leggy Texan in chicken-farmer bib overalls jockeying Maranello-bred stallions.

Shelby’s time behind the wheel is soon cut short; there’s a developing problem with his heart. Yet in 1959, the rising “sport-car” star-nitroglycerin pills tucked under his tongue during racestakes on Le Mans, winning the 24-hour French classic outright with co-driver Roy Salvadori in an Aston Martin.

Despite such remarkable career roots and 1950s’ fame, there’s more to come, starting with the Cobra then moving into the featured Scuderia Ferrari revelry/rivalry. The film speeds towards redline as Carroll, fusing himself and his enterprising Shelby American crew’s smarts with Ford factory money and muscle, goes head to head with the fiercest of opponents: Enzo Ferrari.

In the process, Shelby American becomes a story about cars, people, and conflict that only actual footage and participant commentary can tell as it really was. Where the resolute Mr. Ferrari proclaims, in translated subtitle, “When we lose, it is always clear-and then losing, we build new machines,” Shelby, who earlier couldn’t come to terms with Enzo to drive for his factory team, vows “to whip Ferrari’s ass.”

Their weapons are the Shelbygroomed Ford GT Mark I1 versus Ferrari’s 330 P3. As the battle intensifies, Ferrari’s F1-engined P4 chases the aerodynamically improved Ford Mark IV. Also grandly covered is the FIA’s Gran Turismo class, which pits Shelby Daytona Coupes against Ferrari 250 GTOs in a more fulfilling way than seen in The 24 Hour War. Not to say there aren’t reused images and commentary from the latter in this more recent documentary; by story’s necessity, there are. But the familiar footage and echoed words applied in Shelby American serve seamlessly, profitably, in detailing Shel’s true life.

In one of this documentary’s myriad instances of the Texan’s on-camera and voice-over drawling, growling, sometimes mirthful remarks-Shelby’s illustrious style-he decrees, “The best and most important thing in life [is] believe in what you want and go do that, and don’t let anybody sidetrack you.”

(The aural lure to sidetrack ourselves and talk like Shel is all but irresistible. Try this one yourself: “I don’t give a shit about the Tour de France.” In the film, it’s classic Carroll, swearing that only Daytona, Sebring, and Le Mans count for his zealous goal of ultimate victory over Enzo.)

The endearing thing about Shelbycaptured here in a range from complaint to compliment-is he was a promoting genius and entrepreneur at heart. It took a multitude of folks we know to tell his story: Mario Andretti, Bob Bondurant, Pete Brock, Enzo and Piero Ferrari, Edsel Ford I1 and Henry Ford 111, Mauro Forghieri, Dan Gurney, Lee Holman, Parnelli Jones, Bill Krause, John Surtees, and even more. Not to mention the film’s anchoring narrator, A.J. Baime, author of the groundwork book Go Like Hell- Ford, Ferrari, and Their Battlefir Speed and Glory at Le Mans.

All put together, this latest Chassy Media gift gives us the hll-circle saga of Carroll Shelby, from his Ferrari-driving wins in America to his Ford triumphs over Ferrari in Europe-including sundry marriages, later-life heart and kidney transplants, and dubbing himself “a walking chemical depository.”

Shelby American delivers the authentic Carroll that no other media effort thus far has been able to do. 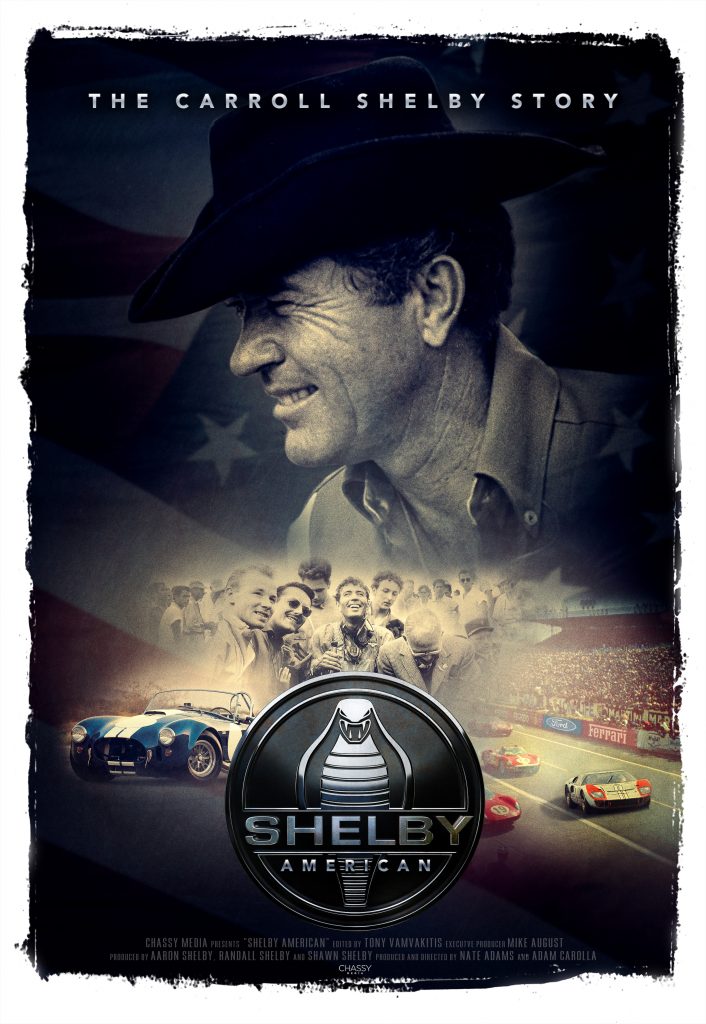